I've worked extensively with THD since 2011, and Data Realms since 2016. Before that point, my work was largely as a solo developer and as a commission pixel artist.

Some of my work is available on itch.io as well, if you prefer that. 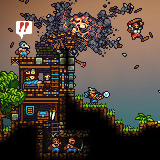 King Arthur's Gold remains my most well known title to date. I made it with Michal Marcinkowski of THD. I was responsible for all of the art in the game, as well as about half of the code.

The game is a competitive medieval sandbox. With three classes, ferocious online multiplayer, a structure collapse system, integrated mod support, a handful of gamemodes, and even a (very short!) single player experience, KAG was a great success.

The community remains bustling to this day, and we still maintain the game. 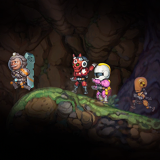 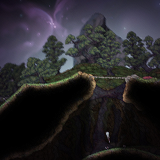 Planetoid Pioneers is a "PhysicsVania" game that I worked on with the folks at Data Realms.

It's an ambitious project with a big team and a lot of heart. The custom physics engine is unparalleled, and the deformable chunk based terrain editors give the world a very unique look and feel.

The in-game editors (included for the public) allow a lot of creativity, and should give the modding community a great start. Hopefully it catches on!

In my usual style, I wore many different hats on Planetoid Pioneers - gameplay code, art, level design, UI, and engine programming. It was a lot of fun! 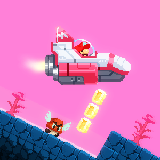 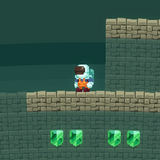 No Mario's Sky is a goofy game made in 72 hours with 3 other Melbourne Indies for Ludum Dare 36.

The game blew up a bit online, getting featured in places such as Wired, Kotaku, and IGN. Thanks to everyone who shared it around, it was a blast seeing people have fun with it!

However, Nintendo DMCA'd it pretty quickly. We quickly prepared non-infringing assets and re-released the game as DMCA's Sky. 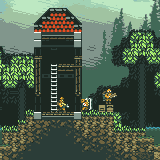 Trench Run is a fast paced, casual sidescrolling shooter. With five classes, persistent online earnings, cosmetics, pets, two gamemodes, and booze to consume in the lobby, it's a very diverse offering. The game also supports up to 4 person couch (gamepad) or huddle (shared keyboard) play for parties and rainy afternoons.

Trench Run was the first game I was involved in with a "proper", dedicated musician (the wonderful Paul Zimmerman), and the soundtrack turned out amazing!

However, the "coffee break" focus of gameplay really ended up holding the game back, and it's remained fairly obscure since release.

Ludum Dare is a 48/72 hour game jam. You are given a theme right as it starts, and have to make a game from scratch by the deadline. I've participated in it quite a lot, and you can view my old entries here, new entries here, and play them all for free!

The entries I'd suggest checking out first are:

These are games I worked on prior to working with Michal at THD. They were produced from my bedroom while still attending high school, or during my first year of university. Some of them are even still playable! 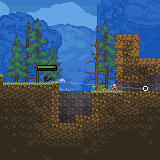 Probably my most successful game of the time period, RvR was a very fast paced sidescrolling shooter, based around squads of units. It was a homage to Soldat and Cortex Command, and got as far as the prototype stage.

Perhaps the biggest success of the game was the relentless AI, which was able to pathfind reliably around the map, engage the enemy accurately, and avoid shooting friendly units.

The art was produced in collaboration with Arne "Lizard" Bergheim, a cool guy from Norway.

You can play RVR here. 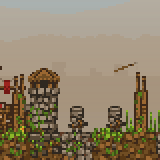 Pocket Wars was my first commercial game - available on the much maligned Blackberry Playbook. The game was built start to finish in a month for the Ludum Dare October Challenge, and while it reviewed fairly well, all things considered, the platform was, and remains to this day, a ghost town.

If curiosity overtakes you, here's the AppWorld link. 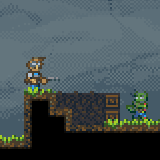 Prelude was my first game attempt after coming out of the Cortex Command modding scene, and was (of course) a zombie survival sandbox game, complete with terrain support mechanics, procedural generation, and multiple tools. Considering that feature list, it's a wonder it ever made it out of the gates.

I'd love to do another platformer with that style of movement - the ledge clambering was excellent.

You can play Prelude here.